【New Year’s Traditions】What do you do for New Year’s in Japan?

Throughout the year, “New Year” is the most blessed mood for the health and well-being of the whole family.

On January 1, New Year’s Day, a deity called Toshigami-sama comes to each household to bring happiness in the New Year.

Once a year, there are many traditional events that celebrate the New Year.

“Oshogatsu” is a fun time to eat osechi, visit the year-end and New Year holidays and get new year gifts.

We will introduce the meaning of the New Year, what the Japanese do during the Oshogatsu and the traditional events.

What do you do for Japanese New Year? 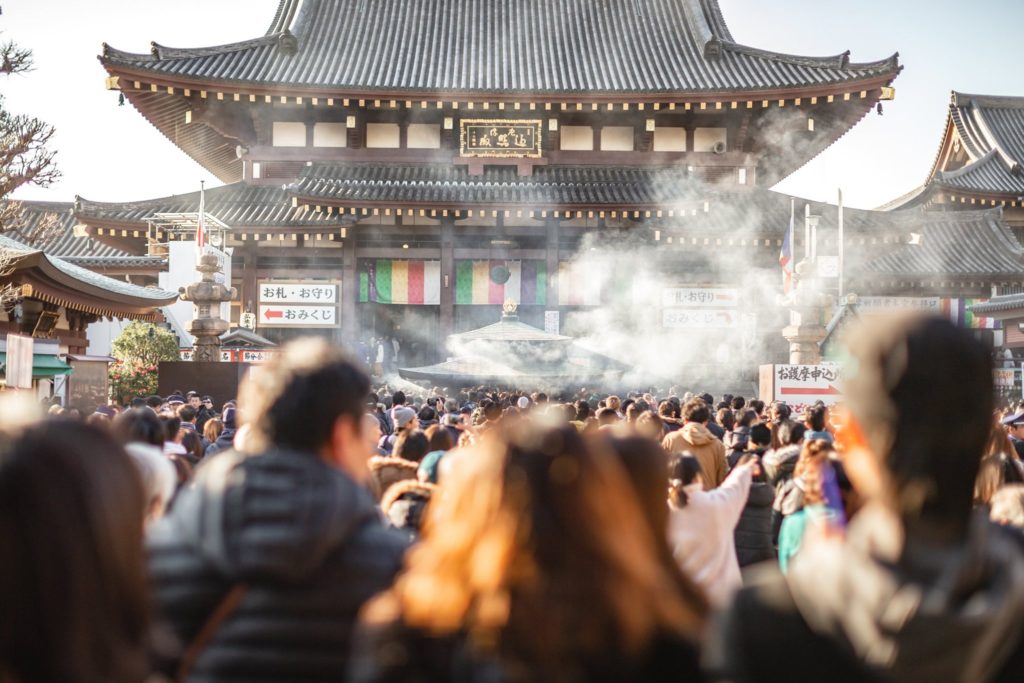 Originally “Oshogatsu” is another name for “January” but it usually refers to the New Year from January 1st to January 7th.

For the Japanese, a special “Oshogatsu” is carefully marked with an “O” and is respected as a “New Year”.

Depending on the region, the 15th and 20th /Small New Year may be the new year.

Since December 31st, the school will be closed during the year-end and New Year holidays, so you can hold a New Year gift event with your family.

In Japan, at the beginning of the year, it was said that the lucky god called “toshigami sama” will come during the New Year.

An ancient Japanese god, he has been deeply involved in the prosperity of descendants and the abundance of five grains.

In order to welcome a special god in the New Year, each house is decorated with Kadomatsu, decorating and kagami mochi and the god stays there.

New Year God makes New Year’s Day happy. The unique Japanese traditions have been passed down to the present day.

New Year’s Day is January 1, the whole country will be in celebration mode at once.

This is because at New Year’s Day, the god of happiness comes down to each family. 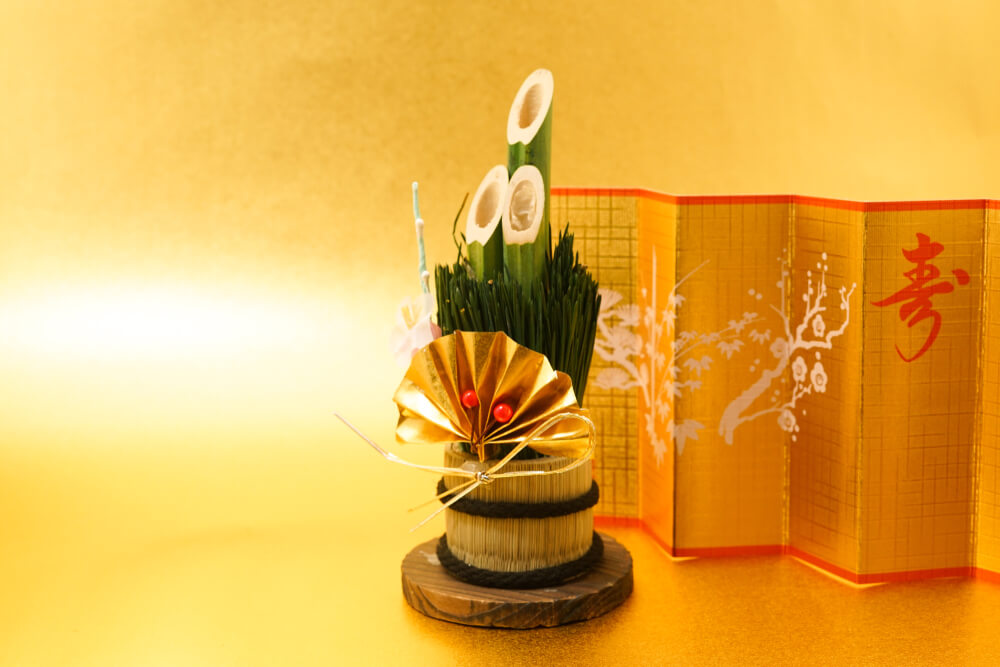 Kadomatsu is a landmark at the entrance, so toshigami god can find a house without hesitation.

Decorations are represent a place ready for the New Year.When you decorate or decorate Kadomatsu, this year’s god will feel like New Year.

The gods have long lived in pine trees and in the past pine trees were planted in the garden.

Previously, Omatsu and Mematsu were exhibited as a pair, but now they have evolved into a lucky charm of bamboo and plum.

Kagamimochi is an offering to the toshigami god
during the New Year.

The round shape of kagami mochi is called kagami mochi because it resembles the shape of an old mirror.It has the meaning of home-enjoyment.

Kagami mochi is an important custom of the New Year and is also the source of the ancient gods where the New Year god dwells.

Kagami mochi is not limited to one in the first year, but it is common to stack two large and small.

The two kagami mochi represent the sun and moon, the sun and shadow and express the desire to grow.

It comes from the “tooth hardening” ritual of eating hard rice cakes, thanking old gods and meeting until the end of the year.

Hatsuhinode/First Sunrise of the Year 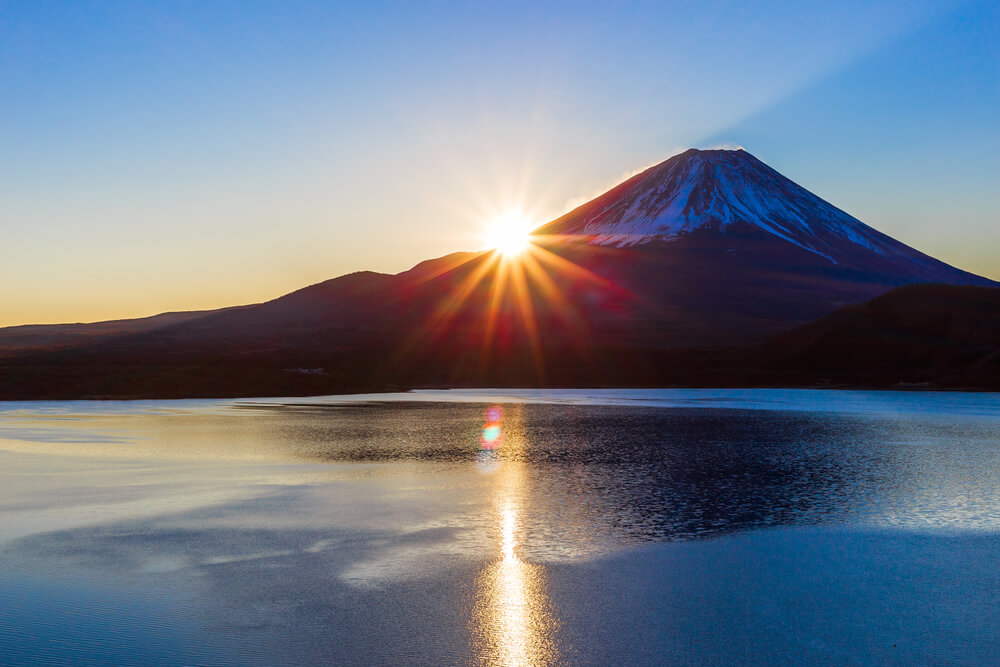 At the beginning of the new year, the first sun in the new year is said to be lucky and the god of that year will fall.

The sunrise at the summit is called “goraiikou”, and they worship the first sunrise of the year.

For Japanese farmers,“toshigami god” is also the god of grain management and wishes for good health and good luck.

The first sunrise of the year is a ceremony welcoming the god of age and important New Year traditions. 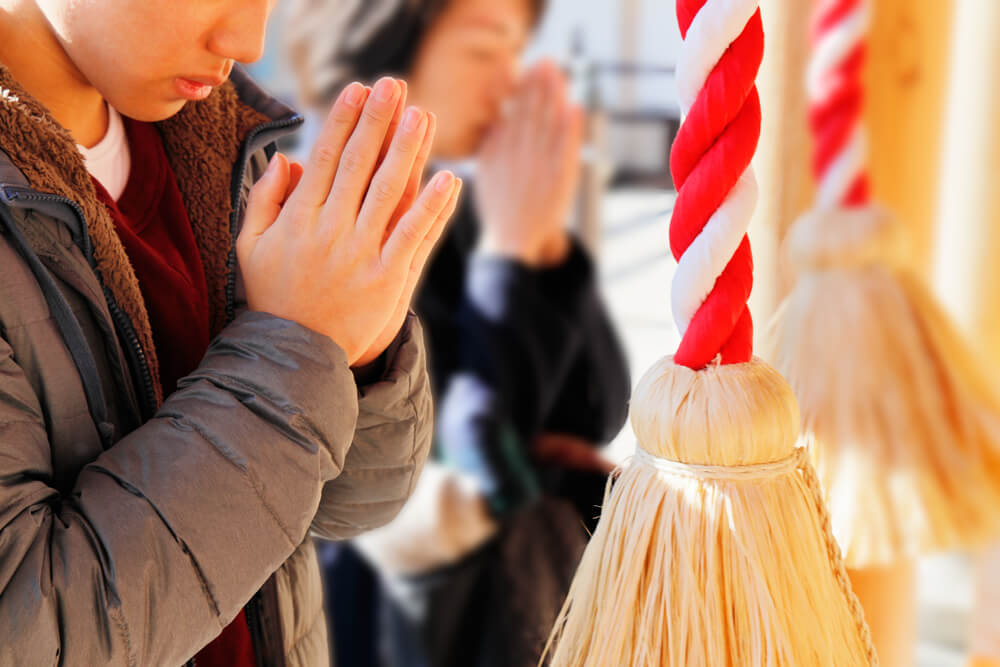 “Hatsumode” is an event to visit temples and shrines at the end of the new year to thank god for the new year and wish for peace during the new year.

The custom of Hatsumode began in the Edo era and it seems that even ancient Japanese worshiped at local shrines.

After the war, the transportation system developed and more people are visiting large shrines in the distance.

There is a time of worship in Hatsumode and it is common to worship from midnight right after New Year until January 7.

Amazake and Shinshu which are used as amulets served at shrines and fortunes and stalls are lined up. 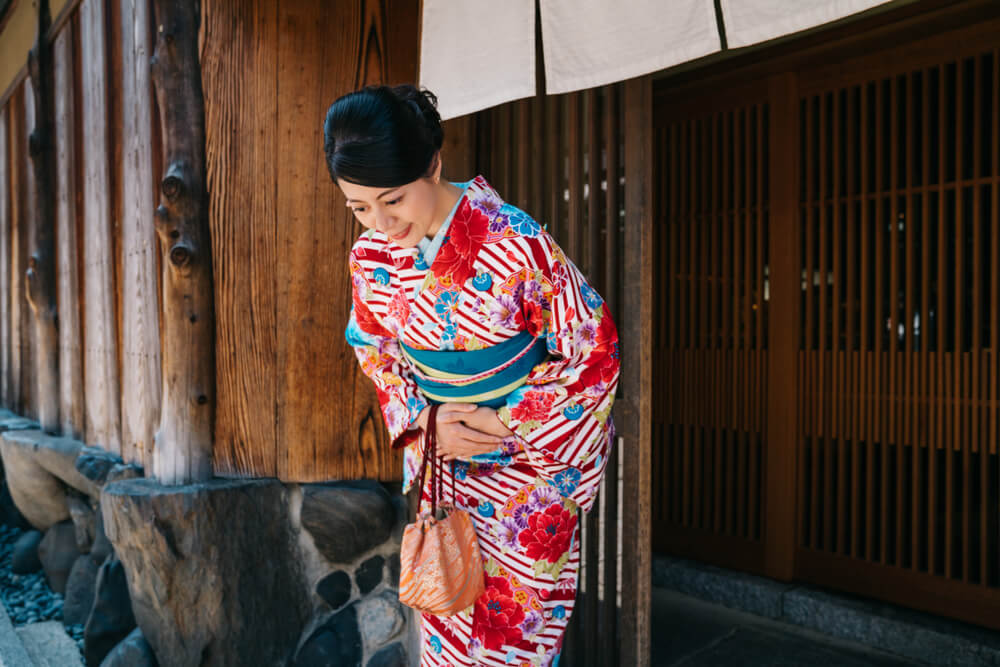 New Year greetings are held at various occasions, such as at home, in the neighborhood, at school, at work and elsewhere.

The greeting for the year-end and New Year holidays is “Akemashite Omrdetou Gozaimasu”.

Tell your boss and business clients who are looking after you “Thank you again this year”. 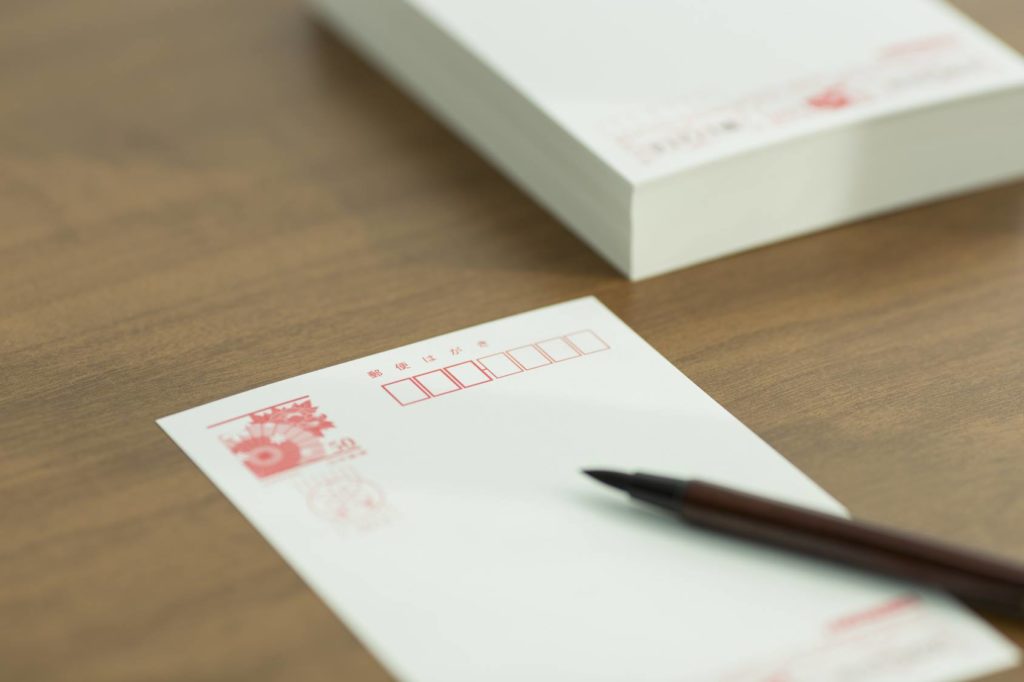 Nengajyo which is a new year’s postcard that conveys the year-end and New Year celebrations to people, friends, relatives and teachers.

I hope everyone has a healthy New Year’s greeting.

Thank you for taking care of me last year.

I look forward to working with you this year too.

New Year’s card must be sent from Matsunouchi (January 1-7).

Matsunouchi is a period of time to display New Year’s decorations, which varies from January 7th in the Kanto area to January 15th in the Kansai area, depending on the region.

In the old days of Japan, there was a custom of “New Year greeting” to visit people who care about them.

Since it is difficult to greet people in the distance, it is customary to write greeting cards for New Year’s cards in letters.

Nengajyo is a special postcard with lottery on the New Year’s card and you can purchase it at the post office or convenience store. 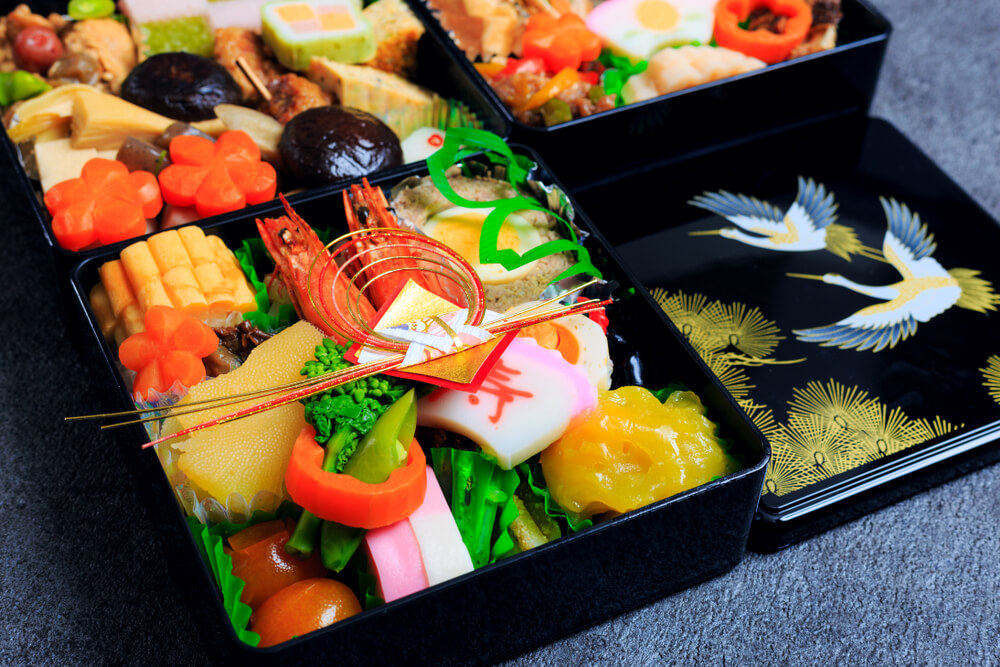 New Year’s food is a lucky dishes that you can eat in hope of prosperity of the family during the New Year.

The ingredients for osechi dishes vary depending on the region, but there are 20 to 30 kinds in total.

They offer osechi dishes that you can save on New Year’s Eve so you don’t have to cook meals during the New Year’s holidays.

The feature is that a pile of boxes suitable for a gorgeous New Year is filled with colorful and luxurious ingredients.

In the old days, five tiers were used to layer up for good luck, but nowadays, as families have become smaller, two- and three-tiered tiers are more common. 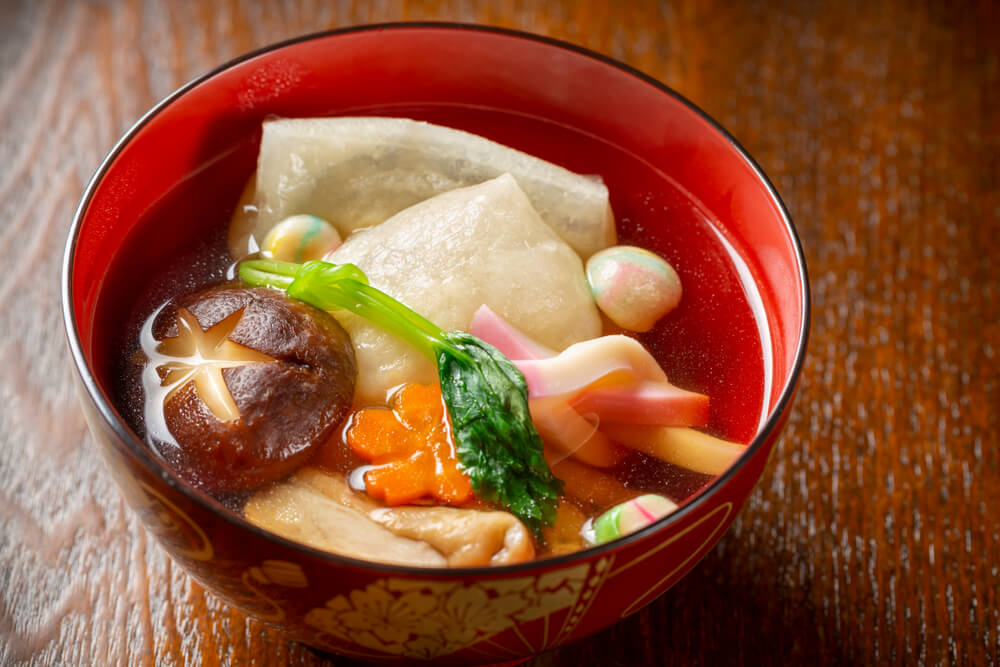 Ozoni is a soup made from rice cakes provided to the New Year God.

The rice cakes dedicated to God all year round, thank you for the harvest and safety of last year and pray for the New Year and the good harvest of your safe life.

Zoni is a food that is easy on the body and has a variety of ingredients and seasonings. 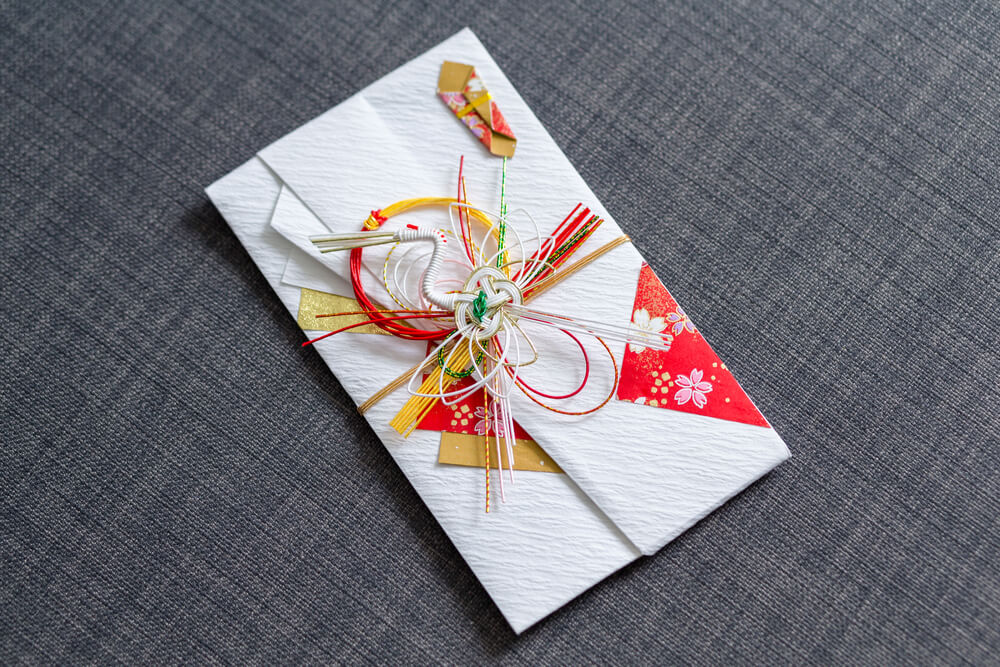 Otoshidama are a celebration of putting money in a small envelope called a New Year potbag.

New Year celebrations, Otoshidama is given from parents to children, seniors to young people, teachers to disciples.

New Year holidays are fun events for children who get new year gifts from their parents and family.

The history of the elderly dates back to the Edo period, and rice cakes were sometimes made with the soul of the New Year god as the “Otoshidama”.

Otoshidama is gift for New Year’s celebrations from an older person to a younger person.

Please note that it is bad manners to give a “Otoshidama” to the elderly.

Many Japanese-style events during the New Year 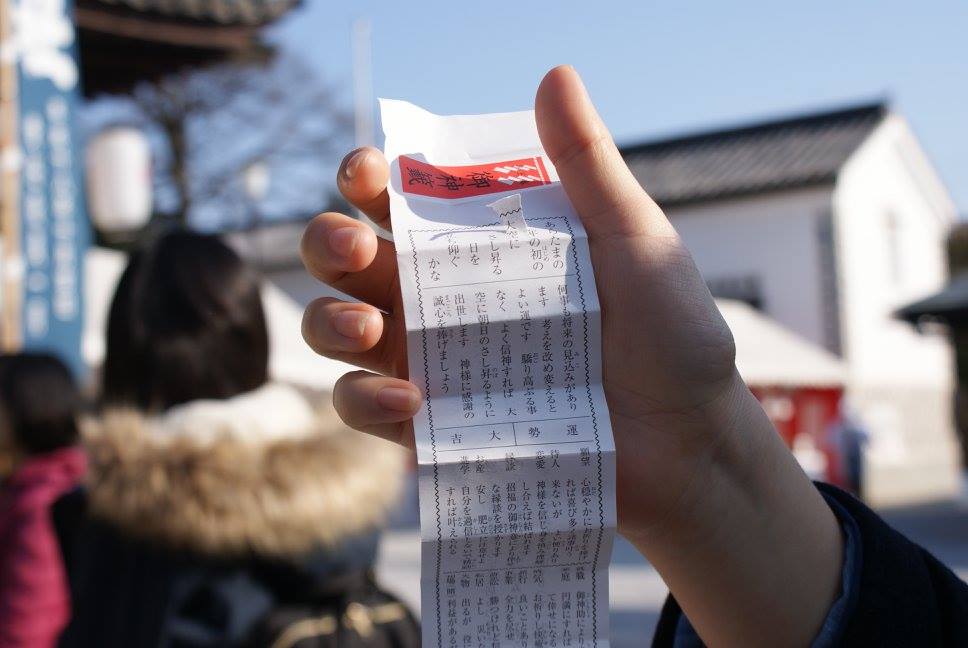 There are many traditional Japanese customs at New Year’s events from January 1st to 7th.

If you want to see the customs of Japanese style new year,visit Japan new year season.

But be careful when you come to Japan new year, public transportation is crowded during holidays.

Japanese New Year, it is important to spend the beginning of the year with God and pray for the security and peace of the year.

Even those who are busy with work or school can share gratitude with their family during the New Year.

Why don’t you try decorating Kadomatsu at the front door on New Year’s Day and experience Kagami-mochi and New Year’s cuisine ?